07Atta chilla (pudla) is a tasty and healthy recipe made with a combination of wheat flour, vegetable, and regular spices. It is a nutritious meal for early morning breakfast or perhaps as a snack for a kid’s lunchbox. It is thin, crispy, and very easy to prepare with all available ingredients in your kitchen. This chilla does not need any side dish but tastes great when served with spicy dahi chutney. Do try this! 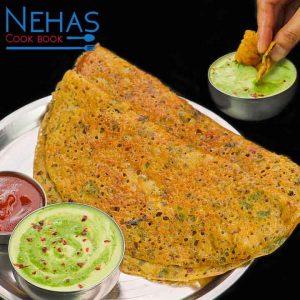